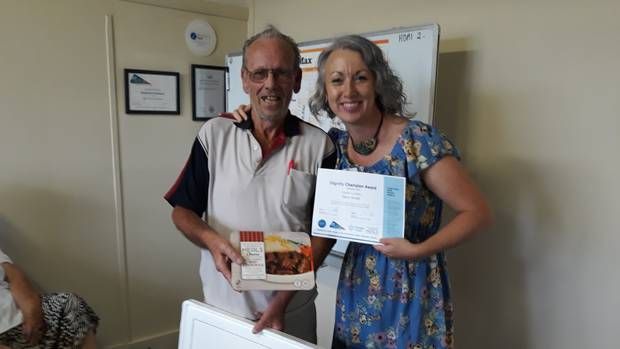 Denis Arnott received a box of goodies at one of our Age Concern meetings, he ripped off the lid and dispersed the goods to everyone there. That's just the kind of guy he is.

"It's not just me, it's about the team," the Hillcrest resident says.

The 71-year-old recently became one of our honorary Age Concern New Zealand Dignity Champions because of his volunteer work with us at Age Concern Rotorua.

Denis thought it was surprised with the prize from our partner Tomorrow's Meals — a box full of frozen meals, which he immediately gave out to all. He was "very honoured", he says.

Denis' background is in dairy farming. He has volunteered with our local Age Concern for the past three years.

His main job has been to drive people to the supermarket.

"The men and ladies, they are ever-so-grateful that someone can help them out," Denis says.

"They're struggling on their own and here's someone who can help them out. I can't care about the petrol money. My wife Sharon was with Age Concern as well — we both were doing it. She passed away a year and a half ago."

Denis has been an active community member especially in athletics. Age Concern chief executive Stephanie Clare says Denis embodies the dignity champion pledge "because you are a kind, patient, and determined to help the older people of Rotorua".

"You fill a variety of roles and are absolutely adored by the Age Concern Rotorua staff and members. You have a huge heart and deserve to be recognised for all of your amazing work. I really appreciate how involved you are in your community and how dedicated you are to Age Concern and the older people of Rotorua."

Local shopping co-ordinator Jody Langdon says she can always count on Denis for anything they require.

"He plays a big role in helping older people especially to get out and about, and get to the supermarket. He's real traditional Kiwi bloke — a bit of a handyman.

"He will do anything for anyone."

We organize activities and events to help those who need healthy social contact. Our volunteers provide a positive and stimulating environment that encourages participation and creates renewed confidence, happiness and lasting relationships with both our volunteers and our elderly.